After our little security team at work went from two people to eight, "my" laptop got assigned to someone else. Not a problem, since it was always the team's laptop, but I had grown to depend on it.

So I bought one to replace it.

I had a price I wanted to pay and a minimum system in mind. I thought I found it in this Lenovo system advertised at Tiger Direct (yes, I finally forgave... in fact I don't remember why I was mad now). The right amount of RAM, disk, good CPU, just the right price. It was perfect.

So perfect I put it in my cart and clicked for checkout. A "May we suggest..." panel was displayed for add-on accessories, one of which was a FUCKING AC ADAPTER FOR FIFTY BUCKS!!!

Six hundred bucks and YOU DON'T GET WHAT YOU NEED TO CHARGE THE BATTERY.

But to be fair, there is no AC adapter in the "Photo Gallery", so you should just know that it's not included.

Disgusted, I dumped my cart and closed my browser. 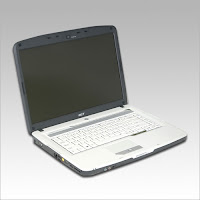 And no checkout surprises.

The big difference was the OS. The Lenovo came with XP Pro. The Acer with "Windows Vista Home Premium". Let's call it WVHP for short.

So I ordered it. The next day, Sunday, Hurricane Ike plowed through Ohio with 75mph winds, knocking our power out for 48 hours. It was weird. There was no rain, just wind. After it blew through, 230,000 people were powerless.

It took my mind off the laptop issue. We had no juice Sunday and came home to a dark house on Monday. Tuesday morning I dragged my three uninteruptible power supplies in to work (where we were on generator power) and charged them up. When we got home Tuesday evening the power was back on.

It figures. I spent most of that evening getting the UT servers, and the power supplies, back online.

Wednesday we came home and the laptop was sitting on the front porch, which severely pissed me off. The last time I bought a PC, UPS would not deliver it without a signature and here was a laptop that cost more than that PC, just sitting there.

But I got over it, unpacked the laptop, and gave it a rundown. Not a bad little unit, but I was thoroughly unimpressed with WVHP, which I expected. I was certain I was going to wipe it and install XP.

Being a Microsoft TechNet subscriber, I can get OS licenses for "free" (after the $400/year subscription fee), so I already had a valid license for XP. But I figured I'd give Vista one more shot and download "Windows Vista Ultimate Edition" (WVUE) just to see if it was any better than WVHP.

And it is. But it's not worth the extra eighty bucks.

I've had it running for a week now and I think I'll stick with it. The performance is fine if you ditch the "Aero" theme. I've heard all sorts of Bad Things about UAC ("User Account Control") in the press, but, oddly, it doesn't bother me at all. I think that comes from using Ubuntu for the past three years. If you want root access, you have to give Ubuntu your password every time, which can get really annoying (usually I just open a root shell anyway). Vista is the same way, but you don't have to plug in a password, just click through a few boxes. And if you want a "root shell" you only need run CMD.EXE as Administrator.

I don't see an issue with that at all.

The problem with Vista, as I see it, are all the stripped down "Home" versions. They are useless. Even the "Business Edition" sucks ass. Ultimate is the only way to fly. If you're curious about the differences, here's a chart to refer to. Don't pay any attention to the MSRPs since Vista is heavily discounted everywhere.


I'm always on the lookout for proxy news. You may remember this story about Florida government workers bypassing URL filtering in the workplace (one of my present job duties is Network Nazi for a large organization). And yes, I'm well aware of the proxy angle in the latest Palin Pwnage but I'm really tired of her and that's so "last week" anyway.

It seems this fellow decided to open his school's filtered proxy to the world so that students wouldn't have to be bothered entering a user name and password to use it.

"My thought was why would someone use a proxy that has a filter on it? "

The result: tens of thousands of users from all over the world slam his proxy, using it to forum-SPAM the planet, and resulting in his IP address getting blacklisted by Google ("We're Sorry...").

Then he decides the right thing to do is blog about his PWNAGE.

In a way this is commendable. I've known many admins who would attribute an event such as this one to "getting hacked" in one way or another and initiate a massive cover-up, but the guy did own up to screwing the pooch all by himself. (In fact, we have an assclown admin at work who smashed the Exchange servers single-handedly and the entire IT department, from the top down, conspired - successfully - to cover it up. This is one of the reasons they don't like security - we uncover the truth.)

Still, in many business environments, this is the kind of crap that gets you canned on the spot.
Posted by Hinky Dink at 9:51 AM 2 comments:


Yes, boys and girl, it has finally happened.

I finally beat that whiny little bitch over at Daily KOS (see below - click for a larger view). The odd thing about that is China isn't even in the top 20 countries hitting that page (a fraction of one percent) and no one from China has ever played UT at any of the DinkNet servers.

But, obviously, they like me! They really like me!
Posted by Hinky Dink at 8:50 PM No comments:

I have a number of things on my mind so I thought I'd throw together a quickie blog to put it all together.

I bought a new USB keyboard and mouse combo kit. I bought the combo because I have given up on wireless mice for the time being. Too many dead batteries.

When I started playing UT on the new keyboard the system consistently hung after about three games. I was convinced it was the new keyboard, so I finally dragged out my old keyboard.

Same deal. The system would just freeze and the sound card would make a loud, annoying sound. Like a buzzsaw. Had to hit the Big Button to get her back. Then I remembered that at about the same time I bought the keyboard & mouse I had upgraded the video driver to the ATI Radeon driver-of-the-month (July 2008 version).

I rolled it back to the 12/2007 driver (the last version 7 driver they made) and it's been rock solid ever since. I swear I have to play this game with the drivers about twice a year.

It took five months to get the proxy list to a half million servers (mostly dead, of course). Less than a week after that I hit the one million mark and now it's holding steady at 1.14 million. After that, I re-wrote a lot of the code to make the whole system faster because I was importing so much data.

Then, two out of the three best sources I had dried up.

Once they migrated mrhinkydink.com to another box, the GoDaddy guy called to make sure everything was OK. He explained that the server had "more resources" than the old server.

OK, whatever. He was clearly defensive. Maybe the call was being recorded for quality assurance purposes.

I took down EXP /// to take another look at the drive that died last December, this time backing up everything I could pull off of it and wiping the drive.

While I was at it, I put up another UT server on a - GASP! - Windows box. It's called "House of TOO MANY MODS" and it will be up through the weekend. This was a "Private Label" UT server I ran on the old ISA 2004 server, which I retired a few weeks ago after its BIOS burnt out.

I did it partially because I was waiting on the backups to complete and partially because I have never run the Chat-O-Matic program across the network. It works flawlessly, and I may move EXP /// over, since it's a weak box and it needs all the CPU cycles it can get.

It may turn out that our new CSO is a wash. I do like the guy, but every day (in every way) he acts more like our old CSO.

He doesn't appear to be able to make a decision, or answer simple "yes-or-no" questions. He has been rumored to have "dropped the ball" on our budget, among other things. He has demonstrated that his technical knowledge is weak, but he won't admit it when he doesn't understand a technical explanation. And, once something has been explained, he has no retention whatsoever. None.

Our team is split up geographically (about 10 miles between buildings) and half of the team seldom sees the other, but I had an extended cigarette break with one of the guys and he is under the impression the CSO has ADD.

My team buddy is no psych expert, but he admits he himself has ADD and is on medication for it. He knows the signs and says the CSO has all the symptoms. He's concerned that this guy isn't going to work out unless he seeks help. He says the rest of the team is as clueless as everyone else is as to where the CSO is taking the Security Program.

Luckily, the place is big enough to jump ship to another department. Unfortunately, I have a lot of inertia.

Posted by Hinky Dink at 1:58 PM No comments: