After experiencing the bizarreness of EXPIV for almost a year now, I think I finally have the bugs figured out.

I added a utility called schedutils that lets you set the processor affinity for a given process. EXPIV now runs exclusively on CPU #0 while BITCH House and Classic3 share CPU #1. This has made a big difference as far as I can tell from this end.

I was so disappointed with EXP's performance I was going to install VMWare GSX server and run the games on a 32bit virtual machine. Unfortunately, that is way too much work if I want to stick with the current kernel. That was when the processor affinity idea dawned on me. Sure enough, Debian had a tool, but it didn't come stock with the distribution.

And speaking of Debian, they just announced they would be discontinuing security updates for Debian r4. That's a real shame because DEBIAN 5 STILL CAN'T RUN VNC4 WORTH A SHIT.

Pissed? A little. I can probably squeeze a couple more years out of 4.0 and roll my own security updates, but up to a point it becomes a losing battle with all the code dependencies.

And it's a shame Ubuntu 9.10 turned out to be a steaming pile of shit or I'd be looking into moving in that direction.
Posted by Hinky Dink at 8:02 PM No comments:


Thanks for the heads up, LT|Bonecru$her//!

I love this job.

Posted by Hinky Dink at 1:54 AM No comments: 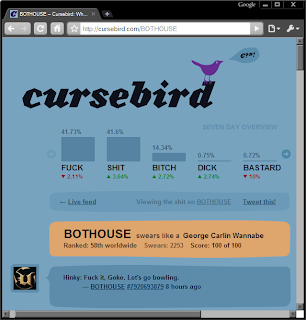 I knew that hack was good for something.
Link available here.
For some reason Exp IV is only ranked 350-ish.
Posted by Hinky Dink at 1:21 AM No comments: 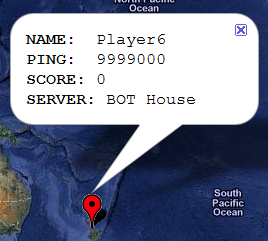 A nine million+ ping?
lulz.
There were a bunch of these today, up to and including a Player10. All the same guy, this fellow down in New Zealand.
A few other things sucked today as well. The power went out briefly, which shouldn't be a problem. But it was a problem! I'm not sure what the issue is. The power was blinking on and off last night, but the UPSes handled it. There was a lot of relay clicking going on but nothing went down. In fact event the boxes not connected to a UPS stayed up, so I thought nothing of it.
Then about noonish today it did it again, but this time two out of the three boxes without a UPS bounced, and BOT House died! That shouldn't happen!
But it did and it sucked.
Luckily the IP made it through the reboot, so no big woof. My biggest complaint is my latest kernel 2.6.32 fix (you may recall I disabled DMA on the hard drives) was going on four weeks without an incident. Now, testing is back to square one. Or maybe square two. Or maybe Free Parking. I dunno. All I know is I didn't pass "GO" and I didn't collect two hundred bucks.
There has also been a lot of general suckiness going on around here lately.
December was a total wash. On the 10th I had the dreaded periodontal surgery. Three teeth ripped out of my mouth and bone grafts. Nasty shit. I was living on Ensure, yogurt, and ice cream for about three weeks. After the 1st of the year the stitches finally fell out, but it sucked.
Later this year I'm supposed to get titanium implants in the new bone and after that heals, I get a pair of fake teeth to replace the ones that got yanked.
In other sucky news, I've just about had it with Ubuntu 9.10! I've done one upgrade (on a VMWare virtual machine) that went well and two fresh installs that were absolute nightmares. This is the first distribution of Linux that I simply can't recommend to anyone. The phrase "steaming pile of shit" comes to mind whenever I think about it now.
I did learn a few stupid Linux tricks in the process, like how to boot from a USB drive when your CD drive is broken and your sucky system doesn't even know how to boot from a USB drive. That alone was worthwhile.
Oh, and work sucks. Don't get me started on that subject.
In general, boys and girls, it sucks to be me lately. Usually, come January/February I chalk this kind of thinking up to Seasonal Affective Disorder, but this time around it feels real and I'm having a hard time shaking it.
So anyway usually the best cure for this is to dive into UT and kick some ass. See you there!
Loser!

Posted by Hinky Dink at 2:22 PM No comments: