Or maybe it escaped, because less than 24 hours later ipset v4.1 came out.

So it's been two weeks and ipset v4.2 is nowhere to be seen, so I finally bit the bullet and installed ipset v4.1 on EXP IV.

You may recall the upgrade to kernel 2.6.31 on EXP IV was declared a huge success at the time. Well, that was back in September. As the days and weeks went by I started noticing some performance issues. It was something like
Posted by Hinky Dink at 11:06 AM No comments: 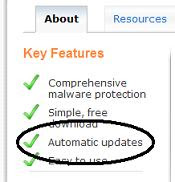 If you read the LARGE PRINT on the MSE download page, you will see, quite plainly stated, that the product offers "automatic updates".

As it turns out, this is not the case.

If you install this software you will notice your virus & spyware definitions (under the "Update" tab of the application) are often days out of date.

If you look at the Update tab closer, you will find this sentence:

I have to do this? What happened to the "Automatic Updates"?

Not surprisingly, I'm not the only Microsoft customer who's pissed off about this state of affairs. See this thread at Microsoft Answers for a good laugh.

You can't trust Microsoft to do anything right and you definitely can't trust their advertising bullshit.

Posted by Hinky Dink at 8:15 AM No comments:


After a very long hiatus I decided to lose 45 minutes of my life and finally upgrade the drivers for my Radeon X1300 on my "old" (circa 2003 - JESUS! That is old!) Windows XP box.

So I sashayed over to ATI/AMD and looked around for the driver-of-the-month.

To my astonishment, the driver was three months old!

Not only that, it was classified as a legacy driver.

Yes, Windows XP is on its last legs, boys and girls. I suppose I could upgrade it but I very rarely use the Old Girl for anything except running Virtual Machines. It currently hosts the VM for the Proxy Project, which runs 24x7, but it still runs UT99 better than my dual AMD64 Windows 7 laptop (recently upgraded from Vista).

Anyway, I downloaded the last ATI driver and played some UT today. It ran nicely, but it made me nostalgic for the Good Old Days back when a 3.4mHz "single core" P4 was a hot system.

And now I can't even complain about the drivers anymore.

Posted by Hinky Dink at 4:12 PM No comments: